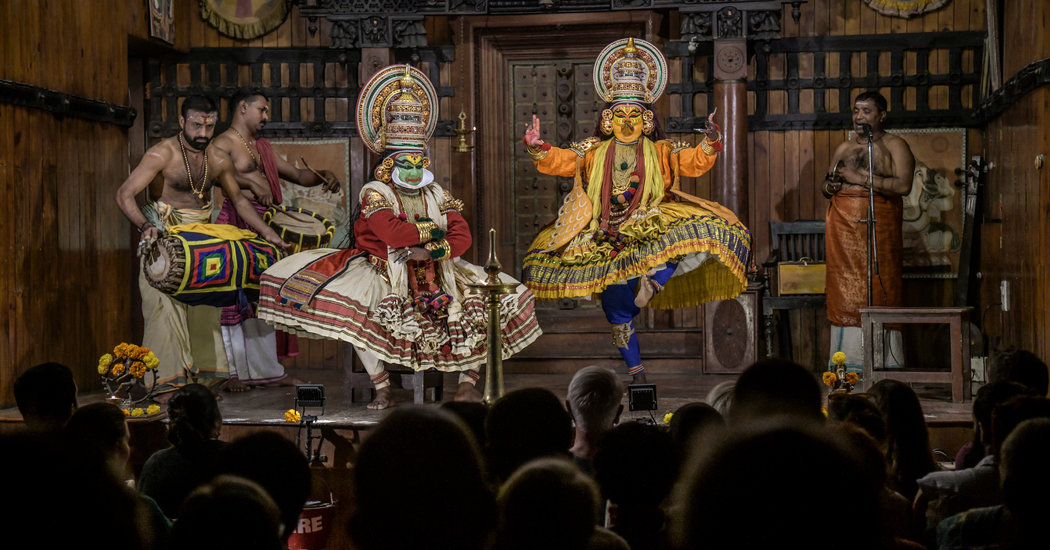 Kerala, as they say, is “God’s Own Country,” a nod to its lush natural beauty, beguiling backwaters and wealth of spices that have been the Holy Grail for generations of seafarers. But the catchy tourism slogan could also be a tribute to the various religious traditions that have thrived there — especially in the port city of Kochi — for thousands of years. Kerala’s unique geography — hemmed in from the rest of India by the mountains to the east, but open to the world by the Arabian Sea to the west — meant the state in southwest India was a cosmopolitan melting pot for far-flung cultures. Hindus, Christians, Jews and Muslims lived side by side and traded with the Arabs and Chinese long before the Portuguese fumbled their way over (it was Kerala that Columbus was after in 1492 when he found himself in the Bahamas instead) and established the first European settlement in India at Cochin in 1500, kicking off successive waves of colonization by the Portuguese, Dutch and British.

Today, Kochi, as Cochin has been renamed, is a popular cruise ship stop and layover for travelers en route to houseboats that cruise through the idyllic backwaters of nearby Alappuzha. But its complex history merits a longer stay. Spend a weekend exploring historic Fort Kochi, whose narrow lanes are lined with buildings that are a legacy of thousands of years of cultural intermingling. And if you’re in the area between December 2020 and March 2021, you won’t want to miss the Kochi-Muziris Biennale, one of the world’s most exciting contemporary art events.

(Like much of India, Kochi has seen protests in recent days against a new citizenship law that many view as discriminatory. While the protests and the police response have involved violence in some parts of the country, Kochi’s protests have not affected areas frequented by tourists.)

Fort Kochi is a bit of a misnomer — the original Portuguese fort no longer stands; the name now refers to Kochi’s historic section. A walk through the quarter helps uncover the layers of influences that have left their mark here. Start near the Chinese fishing nets strung across bamboo and teak poles: They have been there in some form since the 1400s. While they now mostly exist for tourist photo-ops, you can see how fishermen hauled their catch here for centuries. Then cross Vasco da Gama Square toward St. Francis Church, one of the oldest European churches in India. Erected as a Catholic church by the Portuguese in 1503, it was rebuilt as a Protestant church by the Dutch, before being consecrated as an Anglican Church by the English. This is where Vasco da Gama was buried, before his remains were sent back to Lisbon.

Pause for a chai at the charmingly cluttered Teapot Café, before carrying on to the whitewashed Santa Cruz Cathedral Basilica. Then amble along streets lined with bright blue and yellow buildings, dressed with terra cotta roofs and stained-glass windows and fringed with bougainvillea, en route to the Indo-Portuguese Museum, which houses relics and remnants from Kochi churches: Bibles, statues of Mary, and even a 16th-century teak altar. Admission 40 rupees, or about 55 cents.

Kerala is synonymous with kathakali, a classical dance form known for its dramatic stories of gods and demons, and elaborate masks, headdresses and makeup. For those unfamiliar with the art, the Kerala Kathakali Centre offers a primer: The show begins with a demo at 5 p.m., during which performers explain how the makeup is applied, how the intricate movements are performed, and what the characters and the story lines are, followed by a captivating performance at 6 p.m. Tickets are 350 rupees.

Kerala’s setting on the Malabar Coast means seafood is a staple. You’ll dine on some of the best in Fort Kochi at the Fort House, a 16-room hotel with a restaurant at the water’s edge. Sop up the fish with green mango curry (420 rupees) or the ginger-garlic prawns (450 rupees) with appams (fermented-rice pancakes) or a parotta, a flaky flatbread. Dinner for two is around 1,500 rupees.

Historic Kochi was once divided into two sections: Fort Kochi, where the Christians lived, and Mattancherry, which was primarily home to Jews, Hindus and Muslims. Get going bright and early to explore Mattancherry, once a vibrant center of the spice trade. Start with breakfast at Mocha Art Café, a 300-year-old spice warehouse. Try the appam with egg stew (230 rupees), banana, pineapple and nutella pancakes (200 to 250 rupees) or a keema cheese omelet (270 rupees), washed down with a mocha (190 rupees), of course. When you’re done, take a few minutes to check out the exhibits by local artists adorning the brick walls.

Mocha Art Café is just steps away from the 16th-century Paradesi Synagogue, the oldest active synagogue in the British Commonwealth, with global influences in the form of blue hand-painted tiles from China, chandeliers from Belgium and an Oriental rug that was a gift from the Ethiopian emperor Haile Selassie I. There are only a handful of practicing Jews remaining in Kochi, and tourists are needed for a full congregation. From there, head to Mattancherry Palace — also known as the Dutch Palace, though it was a gift from the Portuguese to the King of Cochin in 1555. It’s an intriguing fusion of European and Indian styles, and houses elaborate, 16th-century, temple-style murals of scenes from the Hindu Ramayana epic. Then explore the markets of Jew Town, lined with everything from perfume bottles to embroidered umbrellas to mounds of paint in brilliant shades of fuchsia and cobalt. Nearby are the antiques emporium Ethnic Passage, the contemporary design shop Via Kerala and the fashion designer Joe Ikareth’s boutique.

Back in Fort Kochi, the Indian Oven restaurant at the Cochin Club is a relaxing setting for a languid lunch. There’s a quiet garden, windows open to the water, whimsical murals on the wall, and colorful cushions scattered across cane chairs. Pull one up and tuck into Malabar Coast seafood dishes, like a Kerala-style squid roast and karimeen pollichathu (pearl spot fish prepared in a banana leaf). Lunch for two is around 1,000 rupees.

Though the Kochi-Muziris Biennale brings the art world’s focus on Kochi every other year for three months at a stretch, there are a clutch of galleries worth visiting no matter what time of year you’re in town. Stroll through the lanes of Fort Kochi with stops at David Hall Art Gallery, housed in an old Dutch house where you’ll find everything from exhibitions by global artists to book readings to Sufi devotional music, and Kashi Art Cafe, a gallery-cafe that supports emerging artists.

Two historic warehouses by the sea were joined to make the delightful Pepper House, an open-air cafe, gallery and design shop that’s one of the main venues come Biennale time. The crowd is a mix of creative types and tourists, all converging at the handful of tables scattered around a grassy courtyard. It’s a great spot for breakfast: Fuel up for the day with the French toast with jaggery (unrefined cane sugar) and fresh fruit (250 rupees).

Kochi has been nicknamed the Queen of the Arabian Sea, and the water is an intrinsic element of the city. You can book a tourist boat for a one-hour spin around the harbor, but for a more local experience, take the public ferry (tickets are just 4 rupees). Board at the jetty off Calvathy Road alongside commuters and local families, and whiz past some of the islands that make up the city of Kochi — Vypin, Willingdon, Vallarpadam and Bolgatty — before landing 20 minutes later at the bustling mainland part of the city known as Ernakulam. There, take a quick stroll through the neatly manicured, sea-facing Subhash Bose Park before heading back.

Opened in 2016, the Ginger House Museum Hotel is a plush oasis in the heart of Mattancherry, situated above a sprawling antiques shop and restaurant. Each of the nine rooms is done up in rich, vintage embellishments, like 24-karat-gold Art Deco tiles and a ceiling bedecked in teakwood-framed mirrors. Doubles from 25,000 rupees.

The cheery yellow Forte Kochi has 27 rooms in a restored 18th-century heritage house, just steps from the Chinese fishing nets and many of Fort Kochi’s main attractions. Doubles from 14,000 rupees.

Many of Fort Kochi’s colonial-era houses have been converted to hotels and guesthouses, and there are plenty of charming places to stay within striking distance of all of the historic quarter’s key attractions. Private rooms on Airbnb range anywhere from $15 to $100 per night.

The Slopes Are Green at Copenhagen’s First Ski Hill. Really.

‘Not Much Scares Me.’ Then She Entered the Haunted House.