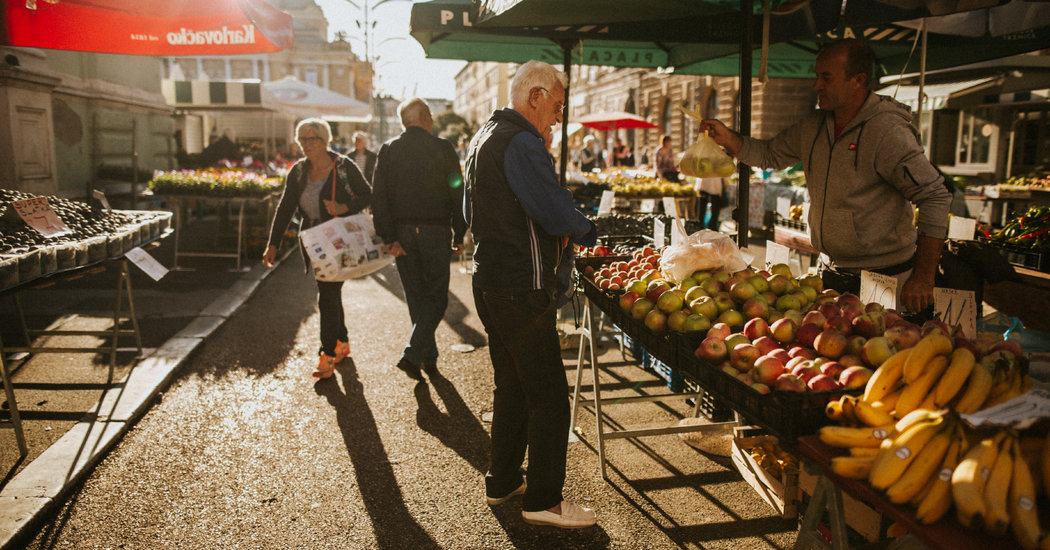 If Croatia’s seaside locales have become tourism starlets, then Rijeka, a working-class port city on the Adriatic, is the country’s gritty understudy. So, it came as some surprise when this town, whose skyline merges Hapsburgian decadence with shipyard cranes, was named European Capital of Culture for 2020 over other Croatian candidates like Dubrovnik and Split. “No one believed we would win,” said Ivan Sarar, Rijeka’s head of culture, about the award. “Being noble underdogs is our cool.”

Famous for raucous Carnival celebrations and an alternative vibe, Rijeka (population 130,000), which has been a shipping and boatbuilding hub for centuries, combines Roman legacy, Italian influence, Austro-Hungarian architecture and fading Yugoslav industry. For visitors, the result is a unique mixture of sights, cuisine and night life. Along with a raft of events set for the 2020 celebrations starting in February, and a five-star Hilton hotel opening next summer, this Croatian harbor seems ready to trade in its cranes for the travel spotlight.

Climb 561 steps up Petar Kruzic Stairway to the 13th-century Trsat Castle on a bluff at the edge of the Rjecina River, for which Rijeka is named. Atop the lookout tower (free entry), the panorama takes in Kvarner Bay, its islands and the Istrian Peninsula’s eastern coast. Below, Rijeka — governed by seven countries since World War I — is beautiful in its dissonance. Green cupolas bob amid terra-cotta rooftops and Renaissance, Baroque and Art Nouveau buildings. Italian villas, empty 19th-century warehouses and blocky Communist-era high-rises fill spaces between. “Rijeka has always had a peripheral existence between empires,” said the local architect Idis Turato. “In some ways this is an advantage as we reinvent the city.”

Back in the center, stop at Pivnica Cont for a patio seat and a house lager; a half liter costs 20 kuna, or about $3. The site of the town’s oldest bar, this beer house has nine draft choices and around 30 Croatian brews. Afterward, cross the river and walk the canal toward the sea until you reach the Croatian National Theatre Ivan pl. Zajc for a 7:30 p.m. show. The neo-Baroque, 650-seat building, constructed in 1885, stages Croatian and Italian drama, ballet and opera. Upcoming performances include Georges Bizet’s “Carmen” on Nov. 23, and three Puccini operas. When inside, notice the paintings — three on the ceiling and one above each side-stage box — by a young Gustav Klimt.

For more than 20 years, Zeljka Fabijanic, the owner of Konoba Na Kantunu (Tavern on the Corner), has scoured the city’s markets for daily ingredients. Take a table — either in the dining room, which is decorated with colorful local canvases, or outside, along the canal — to sample that dedication. Start with a cold octopus, shrimp and squid salad. Then order a glass of Zlahtina white wine from nearby Krk Island, and poached monkfish served with Swiss chard and potatoes. For dessert, the homemade apple, pear or plum strudel with fresh cream is a must. Lunch for two costs around 450 kuna.

Start the day with a stroll down Korzo, Rijeka’s main pedestrian thoroughfare and nerve center. Just off the avenue on a secluded square, dip into Samovar Bar, a cafe with more than 100 teas. Then stroll past the building — now housing a chocolate shop — where a young Fiorello H. La Guardia served as United States consular agent, from 1904 to 1906, then continue to the harborside City Market. Explore open-air kiosks and tables overflowing with fruits and vegetables, surrounding three 19th-century iron pavilions selling meats, cheeses, fresh bread, liqueurs, nuts and right-off-the-boat seafood.

During the Austro-Hungarian Empire, Rijeka exported everything from sugar and paper to playing cards and torpedoes, which were invented here. Start your pursuit of modern local designs in the oldest part of town — near the remains of the Roman settlement Tarsatica, dating from around the third century A.D. Inside Sta Da? (“Really?” in Rijeka dialect), you’ll find branded shirts, tote bags and even backpacks made from recycled bicycle tubes. About 200 feet away, step into Mala Galerija Bruketa. The country’s oldest private gallery, opened in 1974, specializes in individually crafted ceramics: clocks, vases, lamps and dinnerware. Around the corner, Croatia in a Box displays myriad handmade items, including purses, dresses, necklaces, soaps and bowls carved from oak. But the concept at this two-year-old boutique is in the name. Construct your own boxed version of Croatia. Combinations lean toward the gastronomic and include olive oil, wine, sausage, cheese, truffles and chocolate. The largest boxes run about 1,200 kuna.

It doesn’t get any more local than Konoba Fiume. On an alley next to the market, this is the sort of diner where, under vaulted ceilings, fishermen sit with lawyers, and dock workers share tables with politicians. Though Fiume serves scores of tempting, moderately priced dishes like homemade pasta with shrimp and truffles (90 kuna), consult the chalk board’s fresh offerings, close the menu and say one word: “brudet”: a mixed-fish stew made with the day’s best seafood (50 kuna). Surrender to the restaurant’s ingredient suggestions, but ask nicely, and for about 90 kuna more, add the succulent scampi.

Dive deeper into this eclectic port at the Maritime and History Museum of the Croatian Littoral (admission, 20 kuna), in the neo-Renaissance Governor’s Palace, built in 1897. The exhibitions cast a wide net: Bronze Age findings, an interactive city model, ancient ships’ logs and a life vest from the Titanic. The Peek & Poke Computer Museum (30 kuna) packs in more than 7,000 mint-condition, tech-nostalgic items. The evolution of calculators, computers, phones, TVs and video games from every era fill each pixel of space. Finally, the Museum of Modern and Contemporary Art was relocated in 2017 to a complex that once included a sugar refinery and tobacco factory. The venue’s 6,500 square feet house some 8,000 pieces; exhibitions of photography, paintings, sculptures, drawings and film rotate bimonthly (10 kuna).

Start your evening at Celtic Caffe Bard. One of the first real pubs in town when it opened in 1998, the hobbit-hole interior has remained untouched. Choose from a wall of single malts, such as Glenfiddich and Bushmills, try a Belgian beer or order a Croatian craft. While sitting on the terrace, you’ll be within 60 feet of the city’s 17th-century St. Vitus Cathedral, a rotunda with Baroque stylings. Immediately to the left, the Rijeka Tunnel (free entry), built before World War II for air raids, extends more than 1,000 feet under the city’s old town.

Head to the river — once the border separating Italy and Yugoslavia between World Wars — for dinner at Konoboa Nebuloza. A board outside lists specials, such as tuna teriyaki, grilled octopus and lamb. In an intimate dining room — with waiters who practice their trade with Old World formality as they serve a half dozen tables above the water’s edge — start with an aperitif of herb schnapps called travarica. Then have the risotto with shrimp and porcini mushrooms, followed by baked duck confit served with polenta, leeks and beets. Dinner for two, with a bottle of Teran red wine from Istria, costs around 500 kuna.

It seems nearly everyone in Rijeka is either in a band or a D.J. To better understand the city’s groove, take a three-spot, late-night circuit along the river and former industrial zone. Start with a cold Niksicko beer at Caffe Bar Skradin — a family-owned drinking hole, filled with memorabilia, including old radios and maps, since 1964. Under the train tracks, the newly renovated Tunel Club mixes art exhibitions, jazz jams and alternative international and local dance rhythms. End the evening by following the river to Zivot (which means life) and gyrate to electronic and house beats in a disco decorated with wall-size family photos from 1980s Yugoslavia.

Head back to the City Market for brunch. Instead of searching for mimosas and eggs Benedict, make your way to Bistro Mornar (mornar means sailor) for a Rijeka-centric breakfast. Morning shoppers — with bags of vegetables, butcher cuts and seafood — stake out tables with red-and-white-checked cloths under a skiff hanging from a wood-beamed ceiling. Grab a sidewalk seat and start with mussels steamed in olive oil, parsley, wine, brandy and garlic. Order a liter of white Malvazija and opt for the lightly seared tuna steak with roasted carrots, potatoes and perfectly blanched kale. Brunch for two runs 400 kuna.

Take bus number 32 (26 kuna) nine miles to Croatia’s original resort town, Opatija. A getaway for 19th-century Austro-Hungarian royalty, the Opatija Riviera strings together opulence, beaches and traditional communities. Have a coffee on the terrace of Caffé Wagner at Hotel Milenj, once a Hapsburg villa. Then walk the five-mile, seaside Franz Joseph I Promenade, colloquially known as Lungomare. Take in the rotating exhibitions of vintage postcards, posters and old photos at the Croatia Museum of Tourism before ending your stroll in the fishing village of Volosko. Along the way, Rijeka will be in full view on the opposite side of the bay. “People here have absorbed a lot of cultures,” said Vojko Obersnel, the mayor of Rijeka. “Because of that, we accept everyone and keep being ourselves.”

Originally built in 1876, the Grand Hotel Bonavia is — at least until the Hilton is finished — the city’s top-end choice. An anchor in the center just a block behind the main pedestrian promenade, Korzo, the four-star hotel has 120 rooms, multiple bars, two restaurants, a gym and a choice of saunas. A double room with breakfast starts at around 920 kuna.

If private lodging is your inclination, the Molo Longo has 180 apartments, rooms and villas all over the city and surroundings. Accommodations start at around 300 kuna per night, depending on the season, and can include either self check-in or a visit to the office in the middle of town.

To get a real sense of how locals live, book an Airbnb stay in the historic city center near Korzo and the seaside. For an entire one-bedroom apartment, expect to pay around $30.